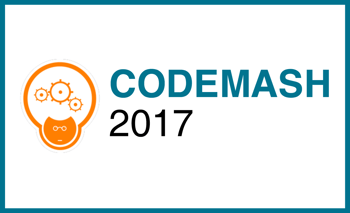 This past weekend, thousands of developers descended on Kalahari waterpark and convention center in Sandusky, Ohio for CodeMash 2017. Our own Greg Crane attended for the second year in a row.

CodeMash is an event that works to “educate developers on current practices, methodologies, and technology trends in a variety of platforms and development languages, such as Java, .NET, Ruby, Python, and PHP.” For Greg, however, it was primarily an opportunity to see what is happening in the development community.

“Last year was my first CodeMash experience and I had a blast. I got to do a bunch of really cool programming stuff and see a lot of cool things. There were a bunch of super interesting classes this year as well,” Greg said.

Some of Greg’s top sessions included AI deep learning, where the group watched an instructor build and program a robot, and a machine learning session where an Amazon Echo controlled a Tesla vehicle. The conference tries to focus on cutting-edge developments, so functional programming was a big focus for this year’s event.

With so much focus on the new and shiny aspects of development, however, some of the basics fell by the wayside. As a Magento developer, Greg was looking forward to attending some PHP sessions, but was disappointed to find that only one was offered this year.

“There were a lot of fascinating topics, but from a web development perspective it was mostly C#. There was only one PHP class, running PHP through the command line, and it was my favorite thing I did,” he said.

Aside from PHP, Greg also focused on some of the more career-oriented sessions this year. While CodeMash is obviously a place to get into the specifics of development, there are also classes that highlight ways to improve or expand upon your tech career.

CodeMash is also a great way to meet other members of the development community. From fellow Northeast Ohio devs, to guest speakers from the Netflix development team, to representatives from Microsoft, a main sponsor, there were plenty of connections to be made

So, if you’re looking to build your C# skills, meet other developers, or learn more about the History of the Infinity Gauntlet and Guardians of the Galaxy, then CodeMash is the place for you! But fellow Magento developers, be warned: PHP takes a back seat. Otherwise, CodeMash is a great opportunity to see what’s happening in tech.