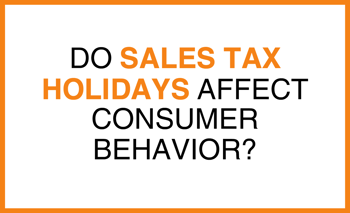 Savvy shoppers know the value of everyday commodities, from the food they eat to the clothing they need and other essentials. They’ve comparison shopped enough to know the reasonable cost of products, and price point is always top of mind. Not everyone approaches shopping this way, but most people appreciate a bargain (does anyone not?). This is one of the main reasons sales exist.

Sales events typically occur at certain times of year for specific products. In the wake of holiday spending hangovers, January features sales of essentials like bed linens and towels. Winter clothing is often marked down when the mercury starts to rise in March. Consumers may not know why a retailer is having a sale, but you can bet the retailer does.

Sales tax holidays are different. State governments — not retailers — determine if and when a sales tax holiday will happen, as well as what will and won’t qualify for the exemption from tax. Instead of cutting into retailer profits, sales tax holidays take a bite out of state and local tax revenue.

So, why do some states provide them?

A Holiday From Sales Tax

There’s a lot of positive press surrounding sales tax holidays, and at first glance, there seems to be no downside for anyone: consumers save money, retailers see an influx of business, and lawmakers get to say they support a tax break.

But dig a little deeper and different data surfaces. Tax-free periods are so brief that many consumers can’t take advantage of them. They complicate sales tax compliance for retailers and may require additional employee training and staff. In addition, tax-free periods reduce sales tax revenue for state and local governments: the 2015 Massachusetts sales tax holiday cost the state approximately $25.5 million. Sales tax holidays may boost sales, but there are real costs associated with them.

And do they in fact boost sales?

All states see a spike in sales of children’s apparel during summer sales tax holidays, but that’s part of the normal, nationwide seasonal pattern: “Mid-July is the kickoff for the back-to-school shopping season,” according to a senior editor at RetailMeNot.com. However, sales during the first three weeks of the back-to-school season are generally somewhat stronger in states with sales tax holidays than in states without them — 11 out of the 16 states that held a sales tax holiday for apparel in 2015 saw unusually large spikes in children’s apparel sales during the week of the holiday. This is in spite of the fact that there are generally greater discounts later in the season (a sales tax holiday typically saves consumers anywhere from 4% to 10%, while retailer sales can slash prices by 20% to 40% or even 50%).

Yet data from 2015 also suggests that back-to-school sales tax holidays shift rather than increase sales. According to the Tax Foundation, an independent tax policy research organization with a conservative bent, “Sales tax holidays do not promote economic growth or significantly increase consumer purchases; the evidence shows that they simply shift the timing of the purchases.” Back-to-school sales rev up quicker in most states with tax-free periods but give back the gain in the fourth week of the back-to-school shopping period. There isn’t a significant overall increase in sales for the season.

Connecticut, which has a week-long tax-free period towards the end of August, had a tax holiday bump of more than 33%.

On the other hand, the following states with a sales tax holiday saw weaker gains than states without a tax holiday — a slump rather than a bump during their 2015 tax-free periods:

Why? Perhaps New Mexico had such a big bump because the holiday is well advertised. Connecticut’s could be so big because the sales tax holiday lasts one full week, allowing more people more time to shop. Residents of Florida, Texas, and Virginia could be more tuned in to the fact that there are greater savings later in the back-to-school season than those offered during the holiday. It’s impossible to say with certainty based on the data at hand. However, sales tax holidays do appear to affect consumer behavior in most states that implement them.

Whether they boost sales or shift them, the compliance burden of tax holidays is irrefutable. This is particularly true for small retailers without large accounting departments and for retailers doing business in more than one state. State product taxability rules differ from state to state during sales tax holidays, as do rules regarding layaway sales, delivery charges, two-for-one bargains, etc. For example:

These subtle differences might seem nitpicky, but they are not to be overlooked. The Texas tax-free period exempts qualifying clothing costing less than $100, and by less than, the state means less than. The Texas Comptroller makes it very clear that a $99.99 shirt is exempt during the holiday and a shirt costing $100 is taxable.

Perhaps most confounding, the exemption doesn’t always apply to the total rate of tax. Alabama doesn’t require local governments to participate, meaning that although the state portion of sales tax must be exempt during tax-free periods, the local portion — or only a portion of the local tax — may still apply. Louisiana exempts only the state portion of tax during its August tax-free period, but exempts both state and local taxes during its Second Amendment holiday (due to budget changes, Louisiana’s 2016-2018 sales tax holiday reduces the state portion by 2% rather than offering a full exemption).

So, are they worth it?

Every state gets to decide for itself, and 17 states (and the Territory of Puerto Rico) have clearly come to the conclusion that they are. Overall, this means less than 40% of states with sales tax opt for a tax-free period. And in Massachusetts, where legislators must decide every year whether to provide for one or not, it’s looking like there won’t be one in 2016 due to budget concerns.

Why not give yourself a break from sales tax and let Avalara manage it for you? Avalara’s AvaTax software-as-a-service helps businesses of all sizes comply with sales and use tax, facilitating compliance during sales tax holidays, the holiday shopping season, and year-round. It’s never too early to plan ahead! Get your free copy of the Tax Compliance for the Holiday Season Guide and Readiness Checklist.