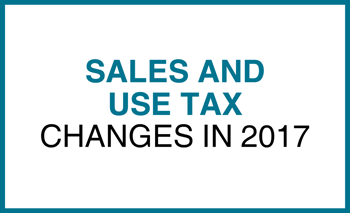 In 2017, when it comes to sales tax, states are taking stances on everything from soda to streaming content, tobacco to tampons. The New Year will also bring renewed efforts by states to implement internet sales taxes and continue the legal battle to overturn existing legislation.

Here is a summary of 2017’s most newsworthy federal and state sales and use tax changes:

The push by states for online sales tax revenue will likely continue in 2017. Oklahoma created new reporting obligations for remote sellers starting in November of this year and Tennessee implemented a new economic nexus policy that takes effect on July 1, 2017. A new use tax notification requirement for remote sellers is also set to take effect on July 1, 2017 in Louisiana.

And four pieces of online sales tax legislation continue to languish on Capitol Hill; three look to impose tax on remote sellers: The Marketplace Fairness Act, the Remote Transactions Parity Act, the Online Sales Simplification Act, and one, the No Regulation without Representation Act, aims to prevent it.

Several states, cities and counties and the Navajo Nation impose higher taxes on sugary drinks like soda, which have “minimal-to-no-nutritional value food.” Philadelphia joins the ranks on January 1, followed by Boulder, Colorado, Oakland, California, and Cook County, Illinois on July 1.

Streaming services such as those provided by Netflix, Hulu, and HBO Go will be subject to sales tax in Pasadena, California beginning January 1. Other cities in California may follow suit. Chicago, Illinois imposes a similar tax.

California’s sales and use tax rate will drop from 7.5% to 7.25% under Proposition 30 (which temporarily increased the rate by 0.25% through December 1, 2016). The state rate decrease also affects certain partial state tax exemptions.

North Carolina use tax will apply to businesses storing tangible personal property or digital property in the state for any period of time. This expansion of use tax is due to the enactment of Senate Bill 729.

Missouri sales and use tax will not be expanded to any currently exempt services in 2017. On November 8, voters approved prohibiting the expansion of sales tax to any services not taxed as of January 1, 2015. It will be interesting to see if Missouri legislators attempt to capture additional sales tax revenue another way.

Ohio will once again exempt investment bullion from sales and use tax beginning January 1.

Maine is expanding the sales tax exemption for products used in certain commercial activities as of January 1. Additional information will soon be available from the Maine Revenue Services.

North Carolina will exempt certain service contracts sold by or on behalf of motor vehicle dealers, in addition to certain sales of food, prepared food, soft drinks, candy, and other items of tangible personal property at school sponsored events. Certain sales of repair, maintenance, and installation services that are part of a real property contract will also be exempt.

Georgia terminated a temporary exemption for tangible personal property used for or in the renovation or expansion of qualifying aquariums in Georgia effective January 1, 2017.

North Carolina will no longer exempt retail sales of tangible personal property, certain digital property, and taxable services by certain nonprofits from sales and use tax as of January 1. Purchases by a manufacturer of fuel or piped natural gas used solely for comfort heating will also no longer be exempt.

More details on all of these changes, including a state-by-state breakdown, can in Avalara’s newly released 2017 Sales Tax Changes report.

Understanding how these sales tax changes impact your business is important, but can also be overwhelming, especially if you are obligated to register, collect and report tax in several states. Automating sales and use tax compliance in your accounting system, ERP or ecommerce system can alleviate much of this strain. Avalara’s tax management software ensures accurate tax calculation (including current changes), proper management of tax exemptions and streamlines the remittance and filing process for sales tax returns in every U.S. jurisdiction.

Permission to reprint or repost given by Avalara. Some content was previously published at www.avalara.com/blog.