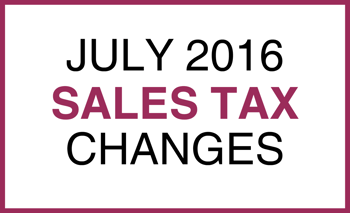 Following Churchill’s logic, sales tax rates, rules, and regulations must be the very embodiment of perfection. Boy, do they change.

They change when states and local tax jurisdictions (counties, municipalities, special districts) need more tax revenue. They change when there’s a revenue surplus. They change in response to pressure from lobbyists, public opinion, or technological innovations. Sometimes, it seems, they change with the tides or the seasons.

There have been a number of red-letter changes to date in 2016, most notably with respect to state sales tax rates and remote sales tax laws. On July 1, local sales and use tax rate changes swept the nation.

Show Me The Money

Who doesn’t need more revenue? Not Louisiana and South Dakota. Lawmakers in both states decided to increase their state sales tax and use tax rates earlier this year. The Louisiana rate went up by 1% on April 1, and the South Dakota rate increased by 0.5% on June 1. There’s been talk of increasing the state rate in Oklahoma, as well, but the governor is opposed to the idea.

Tired of waiting for federal lawmakers to move on the Marketplace Fairness Act, Online Sales Tax Simplification Act, or Remote Transactions Parity Act, state legislators are taking matters into their own hands. So far in 2016:

Legal battles are already brewing over both the Alabama and South Dakota laws. More are sure to follow, and this is exactly what the states want: a path to the United States Supreme Court and a challenge to the status quo.

Most states (46 out of 50) start their new fiscal year on July 1. This is therefore the time that states tend to take up new policies or kiss old ones goodbye. Local sales and use tax rate changes are always numerous, as well.

Anything could happen during the second half of 2016: federal legislators could decide to vote on a remote sales tax bill; Puerto Rico could resurrect the VAT; Arizona could (again) change the way it taxes fine art sold at auctions and galleries; Louisiana could decided to repeal the suspension of some exemptions; the governor of New York could sign the bill that permanently exempts feminine hygiene products from sales tax; Philadelphia could impose a tax on soft drinks (for revenue, not health); and West Virginia could broaden or increase sales tax. This being sales tax, any number of changes could also crop up.

For a more comprehensive overview, including a state by state summary of changes, view our whitepaper, 2016 Fiscal New Year July Sales Tax Changes.

Whenever there is change, be it a rate increase, a new exemption, or an amended regulation, businesses need to be prepared to respond accordingly. Avalara AvaTax provides an automated end-to-end compliance solution for businesses selling in all states. Learn more about Avalara.