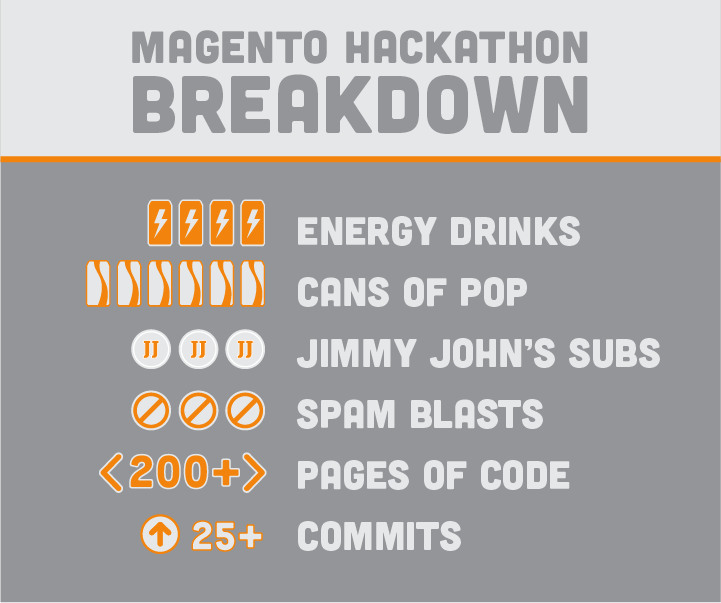 From 2:00 PM on Friday, January 31st , until 4:00 PM on Saturday, February 1st, Kris Brown, a member of the Briteskies development team, participated in the first Magento Hackathon of 2014. Along with approximately 115 other participants from all over the world, Kris spent about 26 hours (with a few hours of sleep) working on coding standards in the upcoming Magento 2 project. Kris worked on a team of five, made up of himself, three Magento partner executives and developers, and one well-known front end developer. Together, the team created a list of commandments for developers in the upcoming Magento 2 release, includuding LESS vs. SASS, code formatting, and how to write HTML classes. Although there were several other projects taking place simultaneously, Kris’ goal for this intense coding marathon was to unify the writing style in Magento 2, as there were multiple ways to perform a task or write code. The goal of this session was to get all developers in the Magento community to follow the same protocol in order to maintain readability and understanding between developers. This makes it easier for others to decipher changes that have been made. The team also came up with a list of nearly 50 issues with Magento 2. They then issued pull requests that, if accepted, will mean that our developers helped write the code for Magento 2. Our team will soon have over ten pull requests for Magento. This was the last Hackathon before the Magento Imagine conference in May. If the results from this Hackathon are significant, then they could be discussed at Imagine and possibly cement some ideas for future Magento releases. Congratulations to Kris and all of the other participants on all of your hard work!