Modernizing the IBM i—What Does it Mean?

When thinking of th 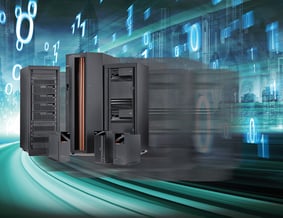 e iSeries* system, many people think of a system that has been around for 30+ years – it’s old, archaic, hard to work with, and the green screen interface is anything but slick or cool. Frankly, the IBM i has a reputation of being old and “rusted in." Because these systems have been in place for so long, there are many third party systems attached to it, and these reach throughout the organization.

Somewhere in the organization, someone inevitably mandates a more modern system that is easier to work with, has more modern software development tools, and makes the data more accessible to other applications. When this sort of overhaul is being considered, the IT team is often left wondering where to start and what to do next. Instead of ripping out the IBM i and replacing it with something else, consider modernizing your iSeries system.

But what does modernization really mean? There are an incredible number of options when it comes to bringing your iSeries system up to date. In reviewing these options, it’s easy to get overwhelmed, and it’s hard to determine which approach provides the best return. Some options to consider specifically are exposing the data and logic that is locked into the 400, improving the user interface, and the software development process.

Updating your approach to development is an excellent place to modernize and can be as simple as exploring new ways to do things. We suggest starting with the following options:

Modernizing the green screen should result in an improved look, workflow and user experience so as to improve the productivity of the business users. The following methods will help shift towards a browser-based UI and achieve those goals:

Some vendors we recommend for green screen modernization solutions are Profound Logic and Look Software.

Exposing the Data and Business Logic Locked in the AS/400

With so many of our projects being eCommerce-related, we are no stranger to an IBM i integration. An integration project allows the eCommerce system to sell to customers and capture orders while the IBM i continues to process transactions safely, securely and quickly. These are the three tools we commonly use to conduct an IBM i eCommerce integration:

The most important thing to keep in mind when conducting a modernization is that the iSeries is still a great backend system. It is powerful, reliable, and still has never had any reported viruses. And the hardware that drives the IBM i is the same hardware that powers Watson, the most powerful computer in the world. It doesn’t get more modern than that!

Click the button below for a deeper dive into these modernization techniques.

*Please note: as we discuss the modernization of the iSeries system, we are modernizing our vocabulary surrounding the issue as well. While the current name is IBM i, many of our clients still refer to and recognize iSeries products ranging from the AS/400 to the Power i system. So, while we know that IBM i is the most up-to-date name for the system, we will still occasionally be using AS/400 and iSeries so as not to alienate those more familiar with those terms.