10 Hidden Costs of Replacing Your IBM i 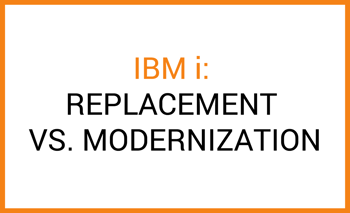 And Why You Should Modernize Instead

It’s a situation we’re all too familiar with: your organization has been running the same IBM i-based software system for years, even decades, and everyone is interested in replacing it with a more modern ERP. Sounds like an easy decision, right? Not so fast.

Aside from the disruption of replacing a system that touches nearly every department and team member, the cost of a project like that can be astronomical. Sure, there’s the cost of the software itself, and most likely the expense of bringing on additional help, but there are some hidden costs as well. Here are just a few of the line items that many organizations don’t realize will crop up during an IBM i replacement project.

Hidden Costs of Replacing Your IBM i

The IBM i relational database encourages users to create their own reports, especially when considering the power of the native Queries (WRKQRY). After years of use, there are usually hundreds, if not thousands, of these reports floating around the system. Whether these reports are customer facing or used to gather data to make business decisions, these reports will be painful to replace.

Replacing your IBM i will require you to review which of your additional systems and integrations are critical and which are unnecessary or can be replaced. And, don’t forget, you may need to update or even replace some of those third-party tools in order to properly integrate with your updated ERP.

Given that the IBM i is typically in place for years (or decades), it’s very common to have a large collection of historical data. We’ve seen files with hundreds of thousands of records, or even over a million rows. That amount of data makes conversion extremely difficult, requiring more time than many of our customers anticipate when starting a project.

The single biggest pain point for a replacement project? Often, it’s forms. Think about the number of forms used in your organization. Invoice, purchase orders, packing slips, credit memos, AP checks, payroll checks, and more are in use.

You know that your existing data backup system, which is tied to the OS/400, will have to change with a software replacement. But have you considered all that will go into that change? It could potentially mean new hardware and tapes, changing backup processes, and a thorough testing of the new systems. All of that takes additional time and resources.

If these systems are in place, then, like your data backups, they will need to be visited, changed and, of course, tested.

Managing an IBM i system is very different than managing other hardware platforms. By bringing in a new technology, you will need to either train your existing admins on the new hardware/software system or hire a brand new team. As we addressed with your IT Talent, either way you choose you will spend some additional time getting the team up to speed.

The list of third-party software systems that run on OS/400 is long. These systems will need to be replaced or migrated to the new hardware stack.

And last but certainly not least complicated, EDI. The first thing to consider when replacing your IBM i while also leveraging EDI is whether the existing EDI tool will port to the new system or if it will need to be replaced. If it needs to be replaced, you’re now looking at both an IBM i replacement and an EDI replacement.

The second thing to consider is the mapping of data in and out of the new system. Regardless of whether or not you replace your EDI as well as your ERP, you will need to develop a new plan for keeping your data straight between systems.

Still with us? That’s an awful lot to consider (and pay for) especially when, in most cases, the IBM i is still a perfectly usable system.

You can get a newly updated and modernized ERP system without replacing everything that has been in place for years. By modernizing your IBM i, you gain all of the benefits of a modern system while maintaining much of the business logic, talent, and third-party tools in place.

Modernizing the IBM i

The most important thing to keep in mind when conducting a modernization is that IBM i is still a great backend system. It is powerful, reliable, and still has never had any reported viruses.

Based on our expertise and experience, the IBM i is a great platform for business. This system stores large amounts of data flawlessly, and is the right place for complex business logic. We also see that the typical RPG developer is more than just a developer. Usually these folks have years and years of business knowledge and help the business folks to get things done. So, when asked to modernize an IBM i system, it’s best to use some of the existing tools alongside a few new ones, use a few new strategies, and unleash the power of IBM i!

Costs of Not Modernizing your IBM i

The Expense of Running an Outdated System

When it comes down to it, it’s more expensive to run an outdated system than it is to run a current system. The older the technology, the more likely it is to fail and the less likely you’ll be able to find a reasonable solution. In fact, IBM itself no longer provides direct support for upgrading AS/400s and older iSeries servers. Staying up to date with your IBM i version means easier access to resources should you need them.

Lack of Compatibility with Current Requirements

Additionally, older systems may no longer be up to the challenge of coping with the sheer quantity of information storage and processing required in today’s world. Now, IBM i is awfully powerful, but when you’re running 20-year-old code on 40-year-old hardware, there’s no way you can meet today’s needs while following best practices. Do it right; modernize your system to meet current business demands.

Next Story
In Defense of Outsourcing Your AS/400 Support →