Why You Should Modernize Your IBM i 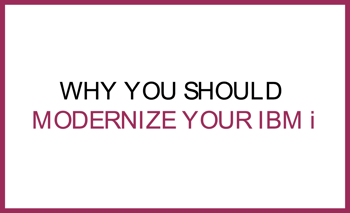 It’s a situation we’re all too familiar with: your organization has been running the same IBM i-based software system for years, even decades, and everyone is interested in replacing it with a more modern ERP. Sounds like an easy decision, right? Not so fast.

The IBM i Legacy

Your company has most likely had IBM i in place for years or even decades. Not only is all of your business logic and data stored there, but the system has been a workhorse for you for years. Based on our expertise and experience, the IBM i is a great platform for business. This system stores large amounts of data flawlessly, and is the right place for complex business logic.

It sits quietly in the corner, without complaining too much, and just continues to run and process transactions.

People and organizations enjoy looking at new and shiny software system and tools, and these new systems look even better when compared to the “old system” in place. It’s no wonder “the 400” is often viewed as an inferior system. But IBM i continues to be the best operating system on the planet, with a rock solid architecture still in place. This system just runs with an uptime of +99.9% and processes transactions faster than any other system around. The database, DB2, is simply amazing, as it automatically performs processes that other systems need a roomful of DBAs to accomplish.

The most important thing to keep in mind when deciding between a replacement and a modernization is that IBM i is still a great backend system. It is powerful, reliable, and still has never had any reported viruses. And the hardware that drives the IBM i is the same hardware that powers Watson, the most powerful computer in the world. It doesn’t get more modern than that!

Aside from the disruption of replacing a system that touches nearly every department and team member, the cost of an ERP replacement project can be astronomical. Sure, there’s the cost of the software itself, and most likely the expense of bringing on additional help, but there are some hidden costs as well.

There are many advantages to conducting a modernization project instead, especially when compared to a full-system replacement project and, frankly, a modernization project will be significantly less expensive. A modernization project allows the company to selectively update certain segments of the system, like a re-facing project, for example, without changing everything else. Also, these projects can be broken down into manageable sprints so that they can be accomplished without a huge distraction to the company. With a bit of planning, the company can focus on the most impactful items first without losing sight of the primary objective of generating revenue.

If you were to replace your IBM i, what happens to your existing IT and management team? Your company must either train your existing team on the new hardware and software or hire a new team.

The IT folks that have been supporting the existing software have likely been around for a long time. They are seasoned veterans and know your business inside and out. We’ve seen over and over again that the typical RPG developer is more than just a developer. Usually they use their company knowledge to help the business team get things done all while managing the IBM i.

If you decide to replace your ERP and then train your current team on the new technology, you run the risk of seasoned professionals not making the leap to the new technology or simply not being as knowledgeable of the new system in a reasonable amount of time.

But the alternative, hiring a new team, isn’t ideal either. By bringing in a new team all together, you lose the wealth of business knowledge accumulated by your existing team over their tenure. Either way, you can expect to spend a good chunk of time getting the team up to speed.

Instead, you can bring your IBM i up to more modern standards, improve its performance, and keep your trusted team in place.

Take one of our client projects as an example of how modernizing your IBM i can be a huge benefit for your company. This client, an independent oil and gas company, maintains thousands of oil and natural gas wells in the United States. Their business data and logic was locked in their IBM i and its legacy RPG and COBOL code. They needed to make a change to their backend system in order to eliminate many manual processes, but replacing their existing system with a newer software package was not an option, as the IBM i was working well for what it was intended to do.

Instead of undergoing a full rip and replace, our team worked with this client to tackle an IBM i modernization. By leveraging existing IBM i code and data, the client was able to add new features and functions to the software platform that significantly reduced manual processes, increased business efficiencies, and added customer satisfaction.

One of the challenges this client was facing was that the legacy ERP system was storing various information about the properties and wells that the client owns and operates. Whenever a new well or property was purchased, that data would be manually entered into their system using their interactive screens. This proved challenging when the client acquired thousands of wells through a single purchase, as all information was entered one well at a time.

To solve this issue and set the client up for future growth, we created a process that allows for the uploading of large quantities of data through a batch process. The process uses all of the business logic already contained in the existing data entry process, and the process is fed by data in a CSV file that has the information about the new wells and properties.

Before this custom solution was implemented, the client had a room full of papers documenting over 30 years’ worth of business. These documents are now all archived and digitized, and are easily recoverable without having to store the physical copies.

While undergoing this initial project, both the client and our team had no way of knowing that the client’s assets would soon double in size. After our IBM i modernization was complete, the client again acquired a batch of thousands of wells. This purchase came with huge amounts of data that needed to be processed.

Using our previously-established solution, our team worked with the client to migrate that data into their system. By using the process that we established initially, the migration went smoothly and the client team saved both time and money. We are happy to report that by using the tools that our team put in place during the original project, our client is continuing to see success with their modernized IBM i system.

If it’s not broken, why fix it?

When your IT infrastructure is working, why spend the time and money (and deal with the headaches) to upgrade to the latest and greatest solutions? This is a question heard frequently from AS/400 and iSeries users who are satisfied with their solution and don’t see the need to move to the most recent version.

However, there are a number of reasons to make the transition to IBM’s newest platform.

The truth is, the older the system, the more likely that it will fail. IBM no longer provides direct support for upgrading older AS/400 systems, and new software releases typically aren’t supported on older systems. That’s a huge gamble to take when you consider the valuable data stored on your IBM i.

If you’re looking to maintain or improve the performance of your system, the first step should be an upgrade. Older systems are often not compatible with newer hardware and software solutions. And, frankly, older systems may not be up to the challenge of the sheer quantity of information storage and processing required in today’s businesses.

Change is not always easy, but when you weigh the benefits of upgrading to newer technology platforms, it is easily justified.

So, where do you start?

If you want to improve your ERP while still maintaining all of the good that IBM i has to offer, a modernization project is for you. The first step in identifying how to proceed is to run a Business Process Review.

The Business Process Review looks at your IBM i and how it is being utilized in your organization compared to industry best practices. Utilizing a cross-departmental approach that brings together a variety of users to evaluate your current software configuration, and examine what is working and not working as well within your organization. The goal is to provide you with a road map by which you can implement solutions for the identified opportunities to better leverage the tools you already have.

With those opportunities identified, you can move forward with your modernization. In the end, you’ll have an updated programming language, an improved user interface, and exposed data and business logic that is ready to integrate with other tools.

Are you ready to start modernizing your IBM i, or want to kick things off with a Business Process Review? Contact our team to get started.

Why It's Time to Audit Your IT Department

Next Story
10 Hidden Costs of Replacing Your IBM i →