Written by Samantha Baran
March 7, 2022 | 1:49 PM
With the new year officially underway we thought it was time to share some predictions by industry leaders and educators for the future of the IBM i (AS/400) system in 2022.
Despite changes big and small to business back-end systems, the IBM i, released in 1988, is still a widely used system. Being prepared for the changes to come is what ensures they'll keep running in the future.
Below is a roundup of trends and opinions based on the HelpSystems 2022 IBM i Marketplace Survey, the annual ALL400 IBM i 2022 survey, and the IT Jungle 2021: An IBM I Year in Review three part series.

Regardless of what you think about it, the cloud will be a big part of the IBM i community in 2022.  Cloud ERPs have been the looming storm for quite some time now. Some companies are migrating completely, taking advantage of lower cost options like Acumatica, others are doing a combination, using their existing IBM i, but combining it with cloud hosting companies like AWS and MS Azure.

There are pros and cons of cloud usage, and for some, the option of moving only parts of their infrastructure over, like disaster recovery for example, is valuable, but there are skeptics. 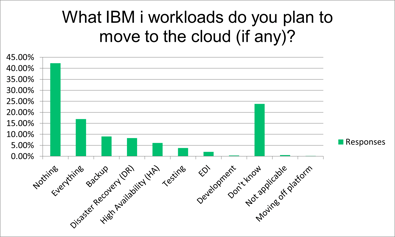 Tom Huntington, the executive vice president of technical solutions at HelpSystems, sees the cloud as an outsider and believes companies will quickly shift away from the cloud as they realize they are “now dependent on technology they have no control over.”

Either way, for now the Cloud is here to stay.

The annual HelpSystems survey stated that 43% of their respondents have no plans to change their current platform, though 23% of respondents do plan to move some or all their applications in the upcoming years.

But of the over 500 companies who responded to John Rockwell's annual ALL400 survey, 51% said they either already have or plan to migrate off the i, and 22% of those respondents attributed the lack of RPG developers as the main driving force behind the move. 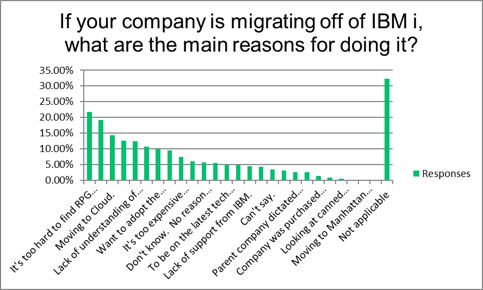 As RPG developers age out, companies are growing more concerned about who will maintain their current system.

RDi is great example of how modernization and innovation can help solve the RPG developer issue.

According to the HelpSystems survey, there’s been a large jump in RDi usage with 22% of their respondents saying that 100% of their developers use RDi.

While there are still a handful of companies that are not using it at all, 71% of companies are using RDi in some capacity or at least own it, an increase from the 60% reported in 2021.

Especially with the RPG challenge, RDi can be at least a portion of the solution; it’s modern, efficient, and increases productivity. And while RPG may not be found in any classrooms, it’s usage on the i is soaring, in part to the combination of languages that can be used along with it. Since modern RPG looks and acts like other languages, programmers are able to take advantage of tools and collaboration techniques that allow a “more modern” language like PHP to work together with existing RPG. With these solutions, companies should have an easier time filling the void as RPG developers exit the workforce.

As is the natural state, competition in the business world will continue to heighten, driving the IT sector to continue to innovate and develop new products and applications. With the IBM i serving as the core application and data server for many companies, there leaves an opening for tools that help connect existing IBM i systems to modern stacks and applications. Companies like Eradani, for example, are doing just this by creating middleware options which allow IBM i applications to interact with new innovative technologies.

At an increasing number of companies, the IBM i is becoming a core application and data server for a widely interconnected technology ecosystem."  - Daniel Magid, CEO of Eradani

REST Integration is another example and, according to an interview Stuart Milligan from Midrange Dynamics recently gave IT Jungle, the trend will continue into this year. "Real-time integration using REST APIs has proven globally to be a rapid and cost-effective strategy for organizations to leverage existing applications and data, while still growing functionality that keeps them competitive."

We couldn't have said it better ourselves.

In 2021 we witnessed a major spike in cyber attacks and the trend doesn't seem to be changing anytime soon. According to the HelpSystems 2022 annual survey, 62% of respondents said that security is their number one concern. And yet, only 30% of companies plan to implement solutions.

As a community, we need to do better.

The IBM i is not as impenetrable as once thought and the tools are out there to secure our systems, so let’s use them. Educate your employees, make sure you aren’t drive mapping to the root, assign appropriate authority profiles for each individual and delete profiles that aren’t in use. Make 2022 the year you create and test your disaster plan. Make sure not only your hardware, but your software is safe and secure. Check those batteries, test your backup server, and tapes.

And so, while 2022 is looking promising let's keep it that way. Briteskies is dedicated to helping IBM i shops stay modern, stay smart, and stay secure. Need help or want to talk to an expert? Give us a call and we'll help you out.

What is an IBM i Security Assessment?

Next Story
Using GUI to Enhance the IBM i →