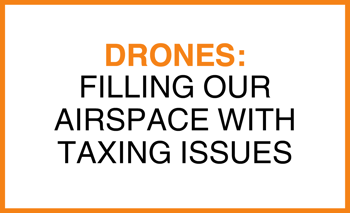 If you follow the news or have seen Eye in the Sky, you know Unmanned Aerial Vehicles (UAVs — or drones) are being used by the military overseas. But drones aren’t only for spying and dropping bombs on enemy territory: they’re also used in disaster response, film production and photography, real estate, and the energy and mining sector. Farmers use them for agricultural purposes, Homeland Security uses them to patrol the border and support law enforcement, and nocturnal hunters use them to send feral pigs to hog heaven.

There are more mundane applications for drones and UAVs, too. Amazon is testing drone deliveries and is already touting Prime Air — future delivery via UAV — on its website. Walmart is testing them in warehouses to scan miles of shelving to ensure all products are in their proper place, and they’re extremely effective: “Scanning all of the shelves in the center takes two employees one month to do manually. The drone can complete the task in an hour.” Walmart’s also following Amazon’s lead and exploring the use of drones in product delivery.

Whether you love or loathe the idea of drones filling our airspace, it seems inevitable. On June 21, 2016, the Federal Aviation Administration “finalized the first operational rules for routine commercial use of small unmanned aircraft systems (UAS)… opening pathways towards fully integrating UAS into the nation’s airspace.” The FAA predicts sales of hobbyist and commercial UAS could reach seven million by 2020. Venture capital is flooding the industry, and hype is building around the more than $82 billion and 100,000 jobs that could result in the next decade from the new rule, which took effect August 29.

In preparation, states have been incorporating drones into legislation since 2013. According to the National Conference of State Legislatures, “State Legislatures across the country are debating if and how UAS technology should be regulated … So far, 32 states have enacted laws addressing UAS issues and an additional five states have adopted resolutions.” Lawmakers are striving to define the terms “drone,” “UAS,” and “UAV,” and to determine their legal and illegal uses. During the 2016 legislative session alone, more than 40 states have introduced legislation relating to UAS/UAV, including Alaska, Idaho, Kansas, Rhode Island, Tennessee, and Vermont. As of yet, however, there is little talk of how drones and sales tax will interact.

Taxation will eventually come into play, of course. It always does. Use of drones in the following areas is likely to force the sales tax issue sooner rather than later.

Drones aren’t dropping packages on our doorsteps (or heads) just yet, but it’s probably only a matter of time before they do. With the FAA’s UAV operational rules having taken effect on August 29, it is no longer necessary to have a pilot’s license to fly a drone and they’ll be taking to the skies in ever-increasing numbers for a variety of purposes. However, the need for pilots to maintain a visual line of sight with their UAVs still stands, meaning Amazon, Walmart and other retailers can’t hit the “delivery by drone” button just yet.

If and when it is possible, tax experts anticipate delivery by drone will be taxed much like other deliveries. That would mean that if the state taxes delivery charges and the delivery drone is owned and operated by the retailer, tax will likely apply to delivery-by-drone charges. On the other hand, if the drone used is owned and operated by a common carrier, tax is unlikely to apply. Since states have yet to address this question, answers remain speculative.

San Francisco-based Skycatch, a drone and software company, has brought the sharing economy to drones. It “helps companies find and hire unmanned aerial vehicles for mapping jobs, surveying, and other work.” It also provides tools to analyze and process the data the drones collect. It’s brilliant — but it also has the potential to create a tax compliance nightmare.

Does sales tax apply to the leasing of drones and drone pilots? Does taxability change if an invoice combines charges for the tangible personal property (the lease of the drone) and those for the piloting service? What happens when information services, always a bit of a bear in the world of sales tax, are thrown in the mix?

States have yet to answer these questions, but they’ll have to confront the issue eventually.

With so many potential commercial, hobbyist, and military uses for drones, the UAV industry is expected to be huge. States, eager for more revenue and jobs, are already courting UAV manufacturers with tax incentives. A total of 24 states courted drone manufacturers in 2013, offering various tax and research and development incentives. For example, Oklahoma allows UAVs to take advantage of the numerous state and local tax incentives it provides to the aerospace industry, and there is a push to provide specific sales tax exemptions to the UAV industry. Other states are still debating the issue: California considered (and ultimately rejected) a sales and use tax exemption for UAV manufacturing. And New York specifically excludes drones from a sales and use tax exemption it provides to general aviation aircraft and machinery.

If the industry explodes as expected, every state will eventually need to determine how sales and use tax does and doesn’t apply to drones. Given the strong independent streak states possess, each is likely to come to its own conclusions. Taxation will vary by state, making compliance all the more challenging for manufacturers, sellers and consumers.

While drone delivery is still a somewhat distant reality, getting products into customers’ hands quickly and without issue is very much a present-day concern for sellers. It can also trip you up tax-wise if you aren’t prepared. The best way to prepare yourself is to start with the basics. Learn more with Avalara's webinar, 10 Sales Tax Rules to Live By.

Next Story
Best of the Blogosphere: September 2016 →