Is Your IBM i Data Where it Belongs? 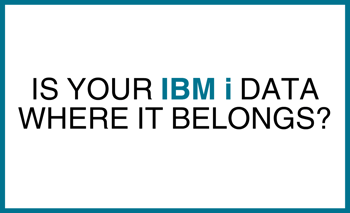 When thinking of the IBM i (formerly AS/400 and iSeries) system, many people think of a system that has been around for 30+ years – it’s old, archaic, hard to work with, and the green screen interface is anything but slick or cool. Frankly, IBM i has a reputation of being old and difficult to integrate to web-based systems.

That said, we love eCommerce projects where we need to integrate to the IBM i platform. We’ve found several tools and methodologies to allow the data to flow easily and quickly. Using these various tools allow us to quickly and easily access any data we need and share it across the two platforms.

With so many of our projects being eCommerce-related, we are no stranger to integrating data on IBM i with external web-systems. An integration project allows the eCommerce system to sell to customers and capture orders while IBM i continues to process transactions safely, securely, and quickly. These are the three tools we commonly use to connect the data on IBM i with the external eCommerce system:

The most important thing to keep in mind when conducting an integration project is that IBM i is still a great backend system. It is powerful, reliable, and still has never had any reported viruses. And the hardware that drives IBM i is the same hardware that powers Watson, the most powerful computer in the world. It doesn’t get more powerful than that!

Are you interested in learning more about how to integrate your IBM i data with your eCommerce system? Click below for a deeper dive into these integration techniques.

Next Story
Best of the Blogosphere: March 2016 →