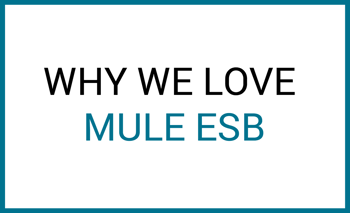 We’ve done our fair share of eCommerce and ERP integrations over the years, and we’ve identified which tools are necessary for a successful integration project; a trustworthy and proven strategy, for example. But another tool we’ve come to rely on again and again is middleware, specifically Mule Enterprise Service Bus.

Before we sing Mule ESB’s phrases, let’s go over what middleware is exactly and how it can help your integration project.

The decision to add eCommerce to your environment, and then integrating that into an already established ERP system, involves a lot of consideration. What data should be shared? What information do the shoppers want and need? How will your eCommerce and ERP systems communicate with each other? When it comes to communication, we have found that using a middleware tool is one of the best options for integration.

Middleware is a piece of software that connects disparate computer systems and allows them to talk. This is usually accomplished by trading XML documents but it can also be achieved by trading flat files, a CSV or some other proprietary data element. Some middleware allow you to change the format of the content, such as entering a CSV file on one side and receiving an XML on the other side. Regardless, all middleware allow for secure transmission of data from one point to the other.

The systems generally plug in through an API or web service on either side of the connection. Both the ERP and eCommerce sides have mechanisms for communication and the middleware sends the data from one side to the other. This allows the systems to run without worrying about what the other system is doing. So, if one system were to go down for any reason, it doesn’t affect the operations of the other system.

One of the many advantages of utilizing middleware is that it allows you to upgrade on either the ERP or eCommerce side without significantly altering the integration. As long as the plug-in points don’t change, the middleware just keeps on running. This makes software upgrades a non-event from the integration perspective.

Additionally, these middleware pieces typically allow for a “one to many” type of integration. If you have multiple systems flowing into the ERP, the integration to the ERP is set up only once, the middleware is plugged in, and that allows the other pieces to hook up to the ERP. For example, let’s say you are integrating three eCommerce instances with one ERP. Instead of three full integrations, a six-step process, the integration takes place once on the ERP end and then once on each of the three other aspects. This allows for scalability and efficiency.

One of the big reasons we like middleware is that it simplifies the communication process. It prevents the need for a bunch of code reaching across the wire from the eCommerce end to the ERP engine and vice versa. With middleware, those disparate systems don’t need integration built directly into them, nor do they affect the operations of the other. By utilizing middleware, the two systems are not forced to talk directly to each other, but to communicate through the middleware.

Because the middleware is now the communication channel between the systems, all monitoring of your integration takes place in one system. This allows you the opportunity to execute built in redundancies, backups, alerts, and monitors within that one system. This built-in security keeps the data safe as it travels across the wire.

Another reason that we love to use middleware is that it avoids the need for a bunch of custom coding in the ERP or eCommerce engines. That allows your upgrades to be a whole lot cleaner and easier, and it lets the systems do what they need to do without reaching across the wire.

One of the most crucial reasons that we use middleware is that it allows both systems to operate independently. If one system is down for maintenance, the other system continues to operate. The messages between the two simply queue up in the middleware system until the other side becomes available. This means that communication drops, nightly processing, or any other interruptions that may occur do not hinder the systems.

Why We Love Mule

Now that we’ve covered why middleware is important, let’s get into why we love Mule ESB.

We use Mule ESB for our integration tool of choice. It is fast, stable, and has a strong track record in the industry. We have found it to be easy to work with, and it gives us many options for file formats and communication methodologies. We typically utilize this tool for our more complex projects. At a base level, this tool processes transactions between IBM I and the eCommerce system. But, it’s more robust and contains more features than other available options, making it an easy choice for our team.

Mule is open sourced and easy to use. As a Java- and Linux-based software, it’s user-friendly. You don’t necessarily need to know how to program in order to use it, instead you can drag and drop the necessary data elements to build your integration.

Enterprise Integration Platform as a Service

Here at Briteskies, we primarily use Mule’s Enterprise Integration Platform as a Service functionality. This includes different connectivity protocols and message delivery styles, data and message mapping and transformation, and integration flow development.

We aren’t the only ones who love this functionality, though. Mule has been named a leader in the Gartner Magic Quadrant for Enterprise Integration Platform as a Service.

Another important feature of Mule is Application Service Governance, which involves assessing and managing communication between applications. This means that Mule is able to keep track of a connection or communication if it is lost and can notify the appropriate party. Maintaining logs of that information keeps things running smoothly.

This feature is another area where Mule is recognized as a leader by Gartner. The Application Service Governance Magic Quadrant evaluated the “planning, design, implementation, publication, operation, consumption, maintenance, and retirement,” of APIs and services, placing Mule in the leader quadrant. Additionally, MuleSoft has a track record of credibility and support, which is critical when it comes to Application Service Governance.

These are a few of the reasons that we’ve leverage Mule in integration projects, but we continue to use it because, simply, it works. It gets the job done so that you can have a reliable integration between your ERP and eCommerce site, setting you up for success.

AS/400 Magento Integration Tools and Strategy

The Best Strategy for Integrating Magento and IBM i