Planning for the Future with the IBM i Roadmap

Thousands of business and organizations rely on the dependability of the IBM i platform, and IBM i continues to show its commitment to customers by continually investing in the operating system. One of the ways it has done that is through Technology Refreshes.

Starting with the announcement of IBM i 7.1, IBM committed to agile development and delivery so that new features and functions could be released more frequently than a full operating system release. Through 11 Technology Refreshes for IBM i 7.1 and four for IBM i 7.2, users have been able to access the latest technology from IBM sooner than they had before.

Following that pattern, IBM will continue to distribute new features and functions for IBM i moving forward. How do we know this? The IBM i Support Roadmap. 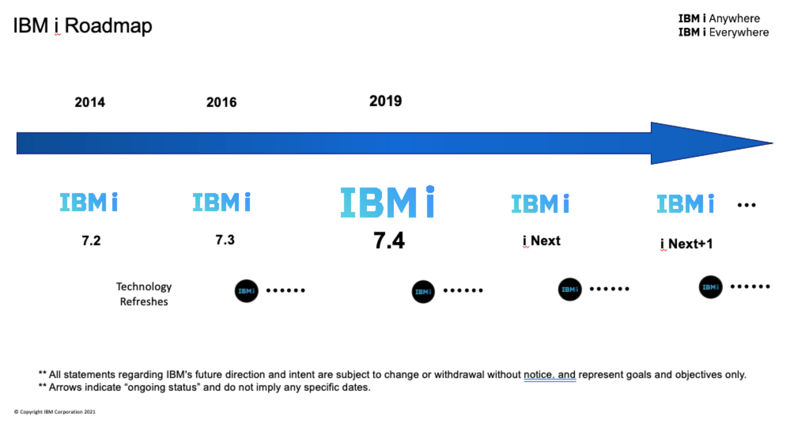 Few, if any, operating systems have a published support roadmap through 2031, but that is exactly what IBM offers IBM i users. And, as new releases are announced, the roadmap will be updated to reflect the associated support dates.

As you can see, we list the future releases of IBM i on the support chart, as a way to demonstrate how far out into the future you can count on having IBM i under support. Seeing a roadmap for IBM i which extends more than a decade can provide a sense of IBM's commitment to IBM i's future."

With the availability of the IBM i Support Roadmap, users can easily plan ahead for those  years of support. Do you have an IBM i upgrade or support project that needs the help of an expert team? Contact us.

Editor's Note: This blog was originally posted in September 2017 and has been updated with new information.

The Rise of Ransomware on IBM i

Next Story
Detecting the Impossible: Auditing Tools for Securing IBM i Databases →