After catching up on sleep and recovering from the desert heat, our Magento team members are back from Imagine 2014. They may have been in Las Vegas, but the work did not stop for Bill, Gian and Derrik, and they are sharing what they learned and saw at the conference. Spoiler alert: there were no Elvis sightings. 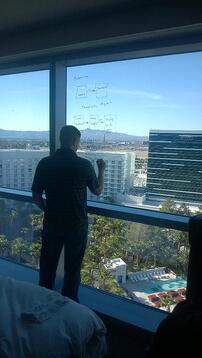 Imagine was held at the Hard Rock Hotel and Casino for the first time this year, and it was a change that was noticeable throughout the conference.

Derrik: There was a more excitable buzz in the air this year, which may have to do with all the really good rock and roll music that was playing all week.

Bill: I have always loved the energy and excitement that comes from the event, and this year was no exception. The classic Rock and Roll all week long was great. Plus, there were four pools instead of just one!

The guest speakers reflected this year’s theme, Transform, in their presentations, as did the breakout sessions, which, as usual, did not disappoint.

Derrik: Attending the breakout sessions was my favorite part of the conference. There were a lot of good sessions that took a technical deep dive into many different aspects of Magento and Magento 2.

I also found the keynote session from Tom Szaky, the owner of TerraCycle, very interesting—he created a company that can 100% recycle everything that is sent to them; From making backpacks out of used chip bags to creating playgrounds from 100% recycled materials. 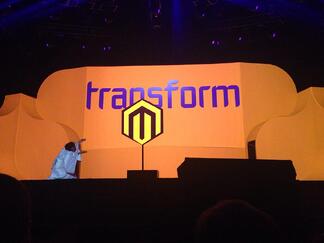 Gian: The Malcolm Gladwell presentation was hands-down my favorite part of this year’s conference. I like how he thinks, because he looks at problems and issues in a very interesting way. Gladwell talked about the transformation of long-established industries (in this case, the shipping industry), and how no matter how mature an industry may be, it is always ripe for disruption from innovation. Using his example, after hundreds of years, the shipping industry was turned on its head by someone who did not know much about the industry. Similarly, Internet and eCommerce are disrupting shopping, and the little guys in the ecommerce world have a chance if they do things correctly. Gladwell’s presentation was great for the audience. There are not a lot of huge companies in the Magento space, so his message resonated with the Imagine crowd.

Bill: There are so many good things about this event. The breakout sessions in particular deliver good content and show off real-world examples of how other companies are using Magento.

As if the Breakout Sessions alone were not a sufficient resource for learning about Magento, the Vendor Showcase gives attendees the chance to meet one another and talk tech. Anyone related to or using the Magento platform can be found in the Showcase, which offers a great opportunity to learn about the Magento community.

Gian: This year’s Showcase was great. The layout was better and there was a great flow. There were a lot more merchants too, which was exciting.

Bill: The Vendor Showcase allows merchants to meet Magento partners and find solutions to their business problems. Anyone working with or who wants to learn more about Magento absolutely needs to attend Imagine to meet the other people working with Magento. That human aspect is absolutely one of the most worthwhile elements of the Imagine Conference. You meet people virtually throughout the year, but it is nice to be able to see them, have a conversation face to face and shake their hand.

Derrik: The connections you make and the knowledge gained from these interactions is so valuable. Meeting people who are considered community leaders or developers was very cool.

The Future of Magento

One of the highlights of Imagine was the long-awaited announcement concerning Magento 2 and future update release schedules for existing technologies.

Bill: There is a roadmap for Magento 2! This is exciting news and now everybody knows when and how this will be released.

Gian: Regular release schedules for Magento, finally! The releases will consist of smaller, more regular chunks of information. Plus, there was an actual timeline for Magento 2 announced! There is a timeline announced, and the beta version should be out in December. Other notable announcements were the Bill Me Later integration into 1.14, and various other features for both Magento and supporting software.

As expected, it was another great year for Magento Imagine. As Roy Rubin said in his keynote, technology is playing a bigger role in commerce than ever before, and we are excited to see how the knowledge and information from the conference will benefit our customers in the year ahead. As Roy also said, transformation is not a one-time event, and no matter where we are today, we need to be moving towards a better tomorrow.

What to Expect From the Magento Commerce 2.4.1 Release

Next Story
The Naked Truth About Clothing and Sales Tax: Avalara Guest Blog →