Dealing with change is standard operating procedure for many companies: employees leave and are hired; new products are introduced and old ones phased out; there are booms, and there are busts. On top of all that, companies need to account for sales and use tax changes. Significant changes in rates, regulations, and product taxability often take effect July 1, which is the start of a new fiscal year in all but a few states. 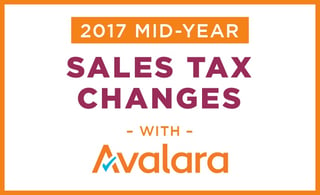 At the end of 2016, we shared many of the sales tax changes set to occur January 1, 2017. These included state sales tax rate changes in California and New Jersey, the expansion of sales tax to certain services in North Carolina, the prohibition of taxing more services in Missouri, and a bevy of recently enacted soda taxes and tampon tax exemptions. At mid-year, we’re seeing a few propositions that signify a dramatic shift in online sales tax revenue.

Perhaps the most notable trend of 2017 is states’ push to obtain tax revenue from remote sales. This isn’t new. States have been working to tax out-of-state sellers for years, but their efforts have been hampered by Quill Corp. v. North Dakota, 504 U.S. 298 (1992) — the landmark Supreme Court ruling that a state can only tax businesses physically located within its borders.

In recent years, states have found creative ways to work around the physical presence precedent upheld by Quill. They’re taxing businesses with ties to in-state affiliates and those that generate a certain amount of business through links on in-state websites (commonly known as click-through nexus). Increasingly, they’re also taxing companies with a certain amount of economic activity in the state (economic nexus). Unfortunately for states in need of additional sales tax revenue, these affiliate, click-through, and economic nexus laws are difficult for states to enforce.

Therefore, many states are looking to different and more aggressive approaches. Two methods in particular have been gaining steam this year: use tax notification and reporting requirements, and taxes on online marketplace providers such as Amazon and eBay.

Use Tax Notification and Reporting Requirements

Colorado paved the way for states to impose use tax notification and reporting requirements on non-collecting out-of-state sellers. After spending years stuck in court, its policy took effect July 1 — the same date a similar policy started in Puerto Rico. Vermont recently passed one and made it effective retroactively, on January 1, 2017. Other states, including Pennsylvania and Texas, are considering use tax notification and reporting measures.

Sending annual reports of consumer purchase activity to consumers and state tax authorities is more work for remote retailers, and Colorado and the other states could be using their policies as a back-door approach to getting out-of-state companies to register and collect. Even if companies choose to not take that route, use tax reporting should help states increase their use tax collections.

Minnesota is the first state to enact a tax on marketplace providers. HF 1 will take effect either on July 1, 2019, or when the Supreme Court modifies its decision in Quill — though the effective date could change if Congress passes legislation allowing states to tax remote sales.

North Carolina, Texas, Washington, and a number of other states are also interested in taxing marketplace providers, and their efforts are likely to continue or resume as 2017 wanes. But not all agree it’s a good idea: New York lawmakers blocked Governor Andrew Cuomo’s attempt to tax them earlier this year.

Federal lawmakers are much preoccupied with tax reform and repealing or revamping the Affordable Care Act. Allowing states to tax remote sales transactions, or definitively preventing them from doing so, seems to be low on their list of priorities. However, we’ve learned to expect the unexpected from Washington, so a federal solution to the problem of untaxed remote sales should not be entirely ruled out.

Two bills have been introduced that would authorize states to tax certain interstate sales: the Marketplace Fairness Act of 2017 and the Remote Transactions Parity Act of 2017.

A bill that would codify the physical presence standard set by Quill and further limit states’ ability to tax interstate sales has also been introduced: the No Representation Without Representation Act of 2017.

Many of the trends seen at the start of the year are continuing as 2017 progresses. Florida has enacted a tampon tax exemption, Seattle a soda tax. Tennessee is lowering the state sales tax rate on food and food ingredients, there are calls to add a statewide sales tax in Alaska, and although he failed to achieve it this session, Governor Jim Justice has been pushing to raise the state sales tax rate in West Virginia. The taxation of services — including online music and movie streaming services — remains a hotly contested topic. And, as always, a plethora of local sales tax rate changes take effect at the start of each new quarter.

Don’t be lulled into complacency during the dog days of summer: there’s a lot happening in the world of sales tax right now. Staying on top of these and other changes will allow you to prepare for them.