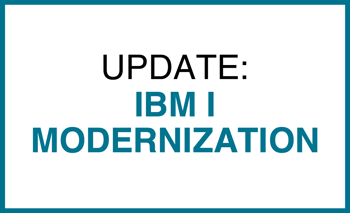 One of the things we love doing is helping our clients realize the power of the technology they already have, especially when it comes to IBM i. Many people think of the system as old and archaic, what with its green screen interface and “rusted in” reputation. But IBM i is a powerful system that should be properly leveraged and modernized as opposed to ripped out and replaced. That’s where our expertise comes in.

Two years ago, we helped a client with an IBM i modernization project, and they continue to reap the benefits today. This client, an independent oil and gas company, maintains thousands of oil and natural gas wells in the United States. Their business data and logic was locked in their IBM i and its legacy RPG and COBOL code. They needed to make a change to their backend system in order to eliminate many manual processes, but replacing their existing system with a newer software package was not an option, as the IBM i was working well for what it was intended to do.

Instead of undergoing a full rip and replace, our team worked with this client to tackle an IBM i modernization. By leveraging existing IBM i code and data, the client was able to add new features and functions to the software platform that significantly reduced manual processes, increased business efficiencies, and added customer satisfaction.

One of the challenges this client was facing was that the legacy ERP system was storing various information about the properties and wells that the client owns and operates. Whenever a new well or property was purchased, that data would be manually entered into their system using their interactive screens. This proved challenging when the client acquired thousands of wells through a single purchase, as all information was entered one well at a time.

To solve this issue and set the client up for future growth, we created a process that allows for the uploading of large quantities of data through a batch process. The process uses all of the business logic already contained in the existing data entry process, and the process is fed by data in a CSV file that has the information about the new wells and properties.

While doing this project two years ago, both the client and our team had no way of knowing that the client’s assets would soon double in size. After our IBM i modernization was complete, the client again acquired a batch of thousands of wells. This purchase came with huge amounts of data that needed to be processed.

Using our previously-established solution, our team is currently working with the client to migrate that data into their system. By using the process that we established initially, the migration is going smoothly and the client team is saving both time and money. We are happy to report that by using the tools that our team put in place during the original project, our client is continuing to see success with their modernized IBM i system.

The Rise of Ransomware on IBM i