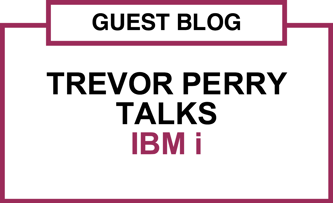 In 1988, System/34 and System/38 were replaced with AS/400. We universally accepted this amazing new server and never once referenced it by one of the predecessor names.

In 2008, System i and System p were replaced with Power Systems. We universally ignored this amazing new server and continue to reference the platform by one of its old brands.

What happened in that 30 years?

You. You happened. You, the person who uses the AS/400 brand and has 999 excuses for using it. It is, however, just a bunch of old and tired excuses. You never made an excuse when the AS/400 arrived. Why are you making excuses now? Easy. You are tired. You have been in this job a long time, and in 30 years, you have settled into your comfortable position. I expect there are a couple of holes in the seat of your chair where your butt cheeks fit. In 30 years, how much have you got off that behind and learned something NEW?

Maybe you are one of the few who keeps up with the industry. From what I see, there is a severe lack of knowledge when it comes to the platform in 2015. In 1988, we did everything we could to learn this new amazing AS/400 platform, and in 2015, we think we know everything. And we don’t.

I ask you this question: What is wrong with calling the platform by its current brand – IBM i?

Look at all your excuses, and realize they are just that – excuses.

And finally, get the brand right. It is IBM i. With a space.

IBM i: the best operating system for business on the planet.

Power Systems: the best business server on the planet.

Will YOU throw out all your excuses? Will YOU step up to IBM i?

The future of the platform is in YOUR hands.

Why It's Time to Audit Your IT Department