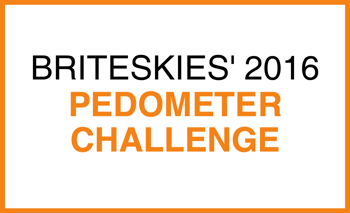 Each year, our office undergoes a wellness challenge organized by Office Manager Rosie Biggs. In the past this has included everything from a 5k and a stair flight competition to tracking miles biked or run in a month, all as part of Rosie’s overarching Wellness Program, which focuses on keeping the Briteskies team healthy. This year’s challenge was to log the number of steps each person took each day of October, with the three team members with the most steps for the month winning a few great prizes.

Rosie chose recording daily step counts as this year’s challenge so that people would be more aware of how much they are moving. Additionally, once you reach 10,000 steps in a day, you’re typically in calorie-burning territory. This was an easy way to encourage people to get moving.

Everyone interested in participating tracked their daily steps by using either an activity tracker they already owned or a Briteskies-provided pedometer. From there, it was off to the races!

Rosie was impressed with the participation this year, saying that the team was really engaged.

“Everyone blew it out of the water this year, and everyone talked about it in the office. No one was bragging, it was great all across the board. Even if people didn’t make their daily goals, they were still participating.”

One big difference with this year’s challenge was that in addition to the big prizes at the end of the month, Rosie offered up interim prizes as well. Whether it was who had the most steps for the week, or a surprise check in to see who had the most steps of the day, Rosie kept people involved and on their toes.

“The interim prizes were a good reminder to people that this was a process, it wasn’t just about the end result.”

While the prizes are of course an encouragement, one thing everyone who participated gets is a better cost on their health coverage. Briteskies rewards any team member who takes part in a wellness challenge with some savings on their insurance.

In the end, our team walked a combined 2,723,124 steps in the month of October, equaling 1,361.56 miles. That’s like walking nearly halfway across the United States! A special congratulations to the top three steppers of the month, who each won a FitBit watch, band, or activity tracker:

Congratulations to everyone who participated for taking a proactive step towards improving your health, and thanks to Rosie for making this challenge a success!